The Current State of M&A Markets 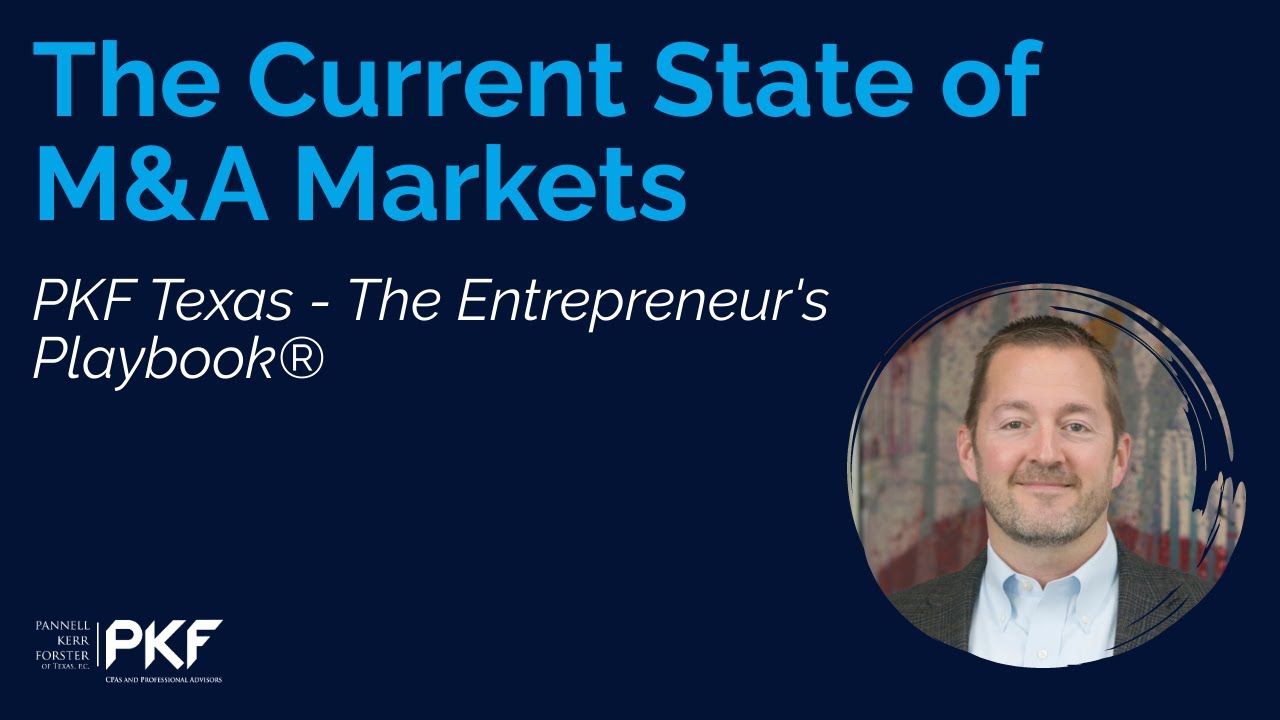 Jen: This is the PKF Texas – Entrepreneur’s Playbook®. I’m Jen Lemanski, and I’m here Chris Hatten, the leader of our transaction advisory services practice. Chris, welcome back to the Playbook.

Chris: It’s my pleasure to be here.

Jen: So, Chris, how would you describe the current state of the M&A markets?

Chris: Well, if I had one word, I would say “hot.” Right now, it’s probably the busiest I can recall it being in my career. I think what kicked it off for us is a lot of the sell-side transaction once people came out of COVID and were ready to get going again.

Jen: So, is that the main driver or are you seeing other factors in what’s making M&A markets so hot?

Chris: No, I think there’s a couple other factors. I mean, you can’t turn on the TV these days without seeing what’s going on with Washington and the legislation that’s trying to get passed, and there’s a lot of stuff buried within those bills that’s going to potentially affect both the buyer and the seller. And so, I think that’s kind of renewed the urgency to keep things.

Obviously COVID was a big issue, and I think there was a lot of deals that were getting close to getting done right before COVID hit us like a freight train, really. And so those deals that were close to getting done still got across the finish line, but then after that, the M&A space, kind of, I would say, came to a grinding halt. And now that is picking up again, because one, people are traveling again. And before that, a big part of getting deals completed was being onsite. If you’re the private equity group, who’s ready to write a substantial check, you’re not going to do it sight unseen. And so now people are out there onsite, they’re talking with management, doing all the dinners and that kind of stuff that really helped facilitate a deal.

And with COVID, what really kind of seized up the markets is people were just really concerned about keeping their doors open. And so, at that point, private equity was worried about their portfolio companies and what they had to do to, kind of, keep things moving along. And same thing with the owner operators. They were worried about making payroll, keeping their people employed to the extent they could, and then navigating through PPP loans and the different options that became available to them.

The last one is you have a lot of these owner operators that now are looking more at retirement and they’re getting closer. They were trying to maybe get this stuff done a year and a half ago, but now that’s been pushed off because of COVID. And they’re saying to themselves, I can’t do.

Jen: I still want to retire.

Chris: Yeah, and I can’t go through another cycle like that. And so, I think that’s what helps has really kind of just pushed us to these levels that we haven’t seen before, as far as just activity throughout the middle market space, as well as, you know, you see within the publicly traded companies. So, those, I think, are the three biggest drivers that I’ve seen that are kind of just really kind of pushing things along.

Jen: Perfect. Well, thank you so much for that perspective. We’ll get you back to talk a little bit more about that soon. Sound good?

Jen: This has been another thought leadership production brought to you by PKF Texas – The Entrepreneur’s Playbook®. If you would like more information about M&A markets and transaction advisory services, visit www.PKFTexas.com. Tune in next week for another chapter.