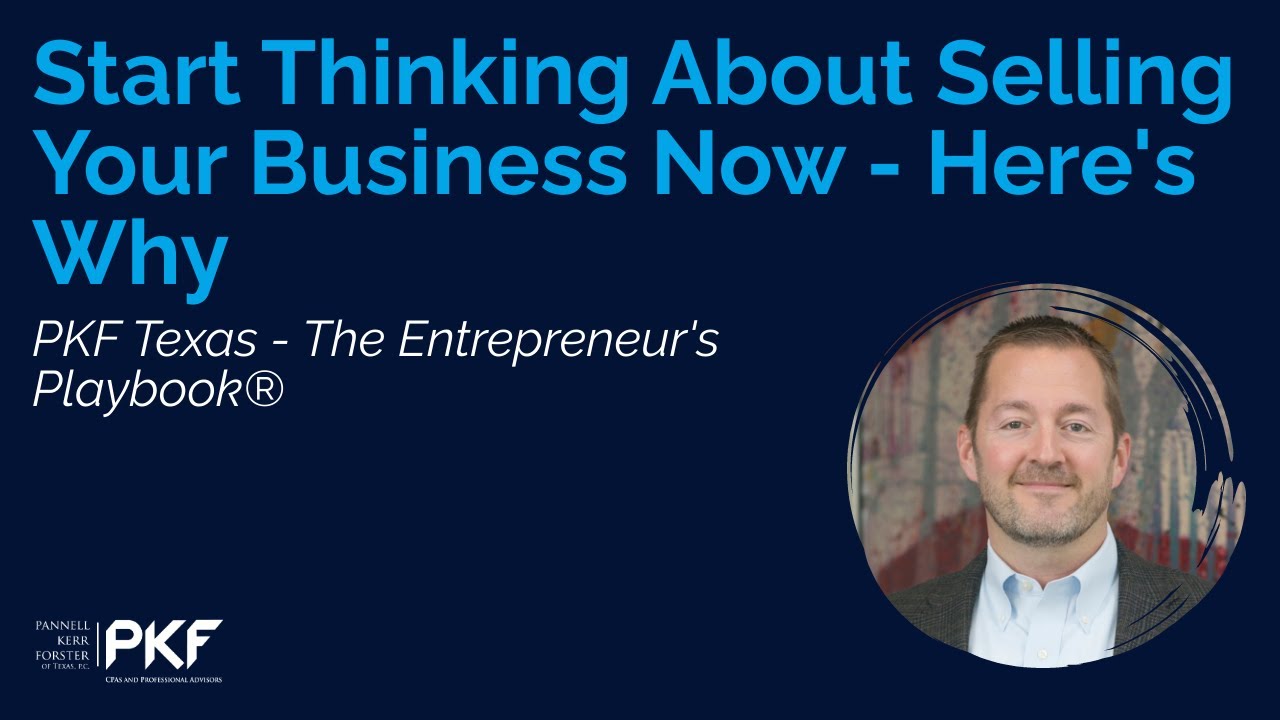 Jen: This is the PKF Texas – Entrepreneur’s Playbook®. I’m Jen Lemanski, and I’m back again with Chris Hatten, the leader of our transaction advisory services practice. Chris, welcome back to the Playbook.

Jen: Chris, so when should a business owner be thinking about exiting the business?

Chris: Well, I like to say all the time, because you never want to be a forced seller in a transaction. And so, I like to say that I like the discipline that it brings to running your business. If you always have that mindset that you’re about to sell your business, you’re going to be running a tighter ship. And I think by doing that, you also have the opportunity then to make improvements whether it’s cutting expenditures, or it could potentially be increasing expenditures because you don’t want to ever just quit running your business. And so, you still want to be opportunistic and look for ways to add value. And some of that might entail you going out and making an acquisition within years of you exiting your business, because you see the additional value that’s going to be brought and then hopefully that turns into a larger payout for the business owner.

I think one thing that’s always resonated with the business owners when I talk with them — and I haven’t, you know, patented this term – but it’s the multiplier effect. And so, let’s say I like using marketing as an example.

Chris: I appreciate that. So, if they want to take, let’s say, they might have, let’s say it’s a $500,000 budget, but they’re saying we think that we can scale back by a $100,000 and their businesses are selling for multiple of six or seven, that could potentially be $600,000 or $700,000 in their pocket when it comes time to sell. But as the buyer, what I want to see is I want to see that money worked out of the system for multiple periods, multiple years, because we all know that if you’re cutting back on marketing, the inverse of that is it could potentially affect sales.

Chris: And so, what I want to see is once they stripped out that a $100,000 out of the business, has it affected sales? Has it affected other parts of the business? And if it hasn’t, then yeah, I’m willing to pay more for that business. But then if I see it’s affecting sales, then I’m going to sit there and say, “Well, then yeah, you’ve decreased potential sales that we’re going to have to go in and sure up as far as that it goes.” But like I said, to me, it’s always just been the discipline. You run a tighter ship, you’re closing your books on time. And so, when it does come time for a transaction, you’re ready to go versus having to sell potentially at the wrong time.

Jen: So, when would you bring an advisor like us in to help shepherd this process?

Chris: Back of the napkin type of thing would probably be two or three years, because it’s going to give you time to make changes. As part of the sales side transactions that we do, we go in and sometimes we see these speed bumps that are there, and what we want to do is have time to really flatten them out so that they are non-issues when it comes time to sell.

Jen: Perfect. Well, we’ll get you back to talk a little bit more about transaction advisory services. Sound good?

Jen: Perfect. This has been another thought leadership production brought to you by PKF Texas – The Entrepreneur’s Playbook®. If you would like more information about this topic, visit www.PKFTexas.com. Tune in next week for another chapter.