Based on the number of SEC comment letters publicly published, the overall volume has been steadily decreasing for the last nine years. We looked at the most common issues raised in an SEC comment letter; the table below shows 10 of the top issues discussed in these letters over the past three years. It is important to note that, in many cases, more than one issue is mentioned. 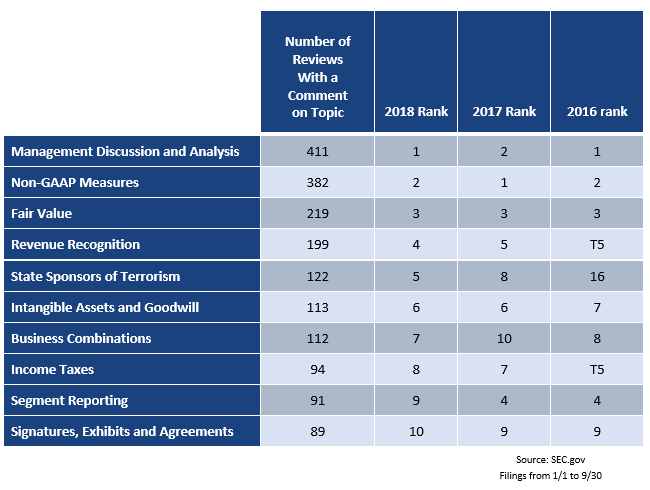 The major topics in 2018 were similar to what we have seen in 2016 and 2017, with MD&A, the use of non-GAAP measures and fair value comments at the top of the list. There are, however, some new emerging trends SEC filers should consider:

MD&A
Comment letters on management’s discussion and analysis (MD&A) continue to be a high priority for the staff of the SEC, with that subject holding down the top two spots for the last three years. The staff appears to believe registrants have more work to do to clarify and enhance meaningful analysis from management’s viewpoint and share that information with investors.

Revenue Recognition
As expected, there has been a noticeable increase in revenue recognition comments with the adoption of ASC 606 in January 1, 2018 for most registrants. The SEC has indicated the staff plans to take a hard look at the first annual reports under the new standard, with a focus on material matters.

State Sponsors of Terrorism
The amount of SEC comments regarding terrorist nation sponsor reporting was higher as a percentage of all letters in 2018. Comments are generally related to describing the nature and extent of any past, current and anticipated contacts with Syria, Sudan and other nations known to be state sponsors of terrorism.

Income Taxes
The number of comments regarding income taxes has declined since last year, with most of the comments relating to general tax matters (e.g., effective tax rates and valuation allowances) or the Tax Cuts and Jobs Act (TCJA) and other tax reform matters.

Segment Reporting
The number of comments involving segment reporting experienced a decline in 2018. Overall, the comments remained similar to what was experienced in 2017.

In Conclusion…
Generally, we expect comment letter trends to remain the same in 2019, with the exception of an increase in comments related to both revenue recognition and state sponsors of terrorism. If you’re a public company, you’ll likely receive a comment letter from the SEC at least once every three years. Hopefully this analysis gives you food for thought as you’re preparing your periodic filings.

For more information about the SEC, visit www.PKFTexas.com/SECDesk.