Best of… How the SECURE Act Affects Pension Plans 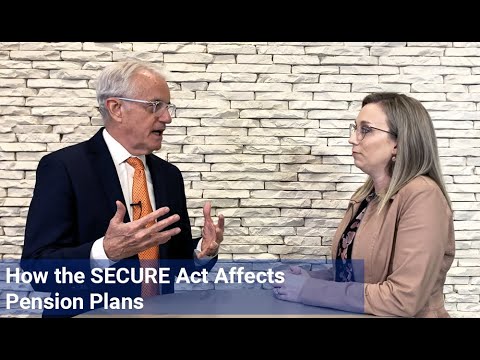 Russ: This is the PKF Texas Entrepreneur’s Playbook. I’m Russ Capper, this week’s guest host, and I’m here once again with Kristin Ryan, Audit Senior Manager and one of the faces of the PKF Texas employee benefit plan team. Kristin, great to see you again.

Kristin: Yeah, absolutely. So, we focused on defined contributions, the 401(k) plans last time. We want to focus on pension plans this time. So, one of the big things that I’m hearing about a lot with the pension plans is their relief for nondiscrimination testing for frozen plans. So, now a plan that’s frozen, participation frozen contributions, doesn’t have to do as much testing.

Russ: And why would they do that?

Kristin: Typically it’s the cost of a pension plan is just so high and they’re trying to get out of that world and move to, usually, a 401(k) plan. There is some relief for 401(k) plans, too, if there’s grandfather provisions. So, if they’re doing—it’s just something to consider when they’re doing design of a new plan.

Russ: Okay, well, tell us. There’s more I take it?

Kristin: There is more and not quite as much as the DC or the 401(k) plans, but the other change to the DB plans or the pension plans is acceleration of in-service distribution. So, it’s now at 59 ½ instead of age 62, so for 401(k) plans you can typically take an in-service distribution at early retirement or retirement age. Now, with pension plans, that’s been accelerated; you can take that sooner.

Kristin: Yeah, so, there’s one more thing I wanted to mention today. So, they kind of, in another avenue not related to retirement plans specifically, but it did repeal the Affordable Care Act requirement for the “Cadillac tax,” so a lot of employers are happy to see that they don’t have to pay the “Cadillac tax” now on those high-cost health plans, those rich plans that the Affordable Care Act requirement put in place.

Russ: I got a feeling you’re going to get a lot of calls after people watch this.

(Note: this is a past episode with past information.) And we have an event coming up also planned for April. You’ll be hearing more about that, but we have a panel discussion on the SECURE Act, and we’ll get into a deeper dive with that. And we wanted to mention that if you haven’t received an invitation in March, usually that’s when that would go out, we encourage you to reach out to Jen Lemanski, who is our Practice Growth Senior Manager. You can reach her at JLemanski@pkftexas.com.

Russ: Cool, thanks for being here once again.

Kristin: Thank you. I appreciate it.

Russ: You bet. For more information about this topic, visit www.PKFTexas.com/BenefitPlanAudits. This has been another Thought Leader production brought to you by PKF Texas – The Entrepreneur’s Playbook. Tune in next week for another chapter.