A Conversation with Consul General Harish 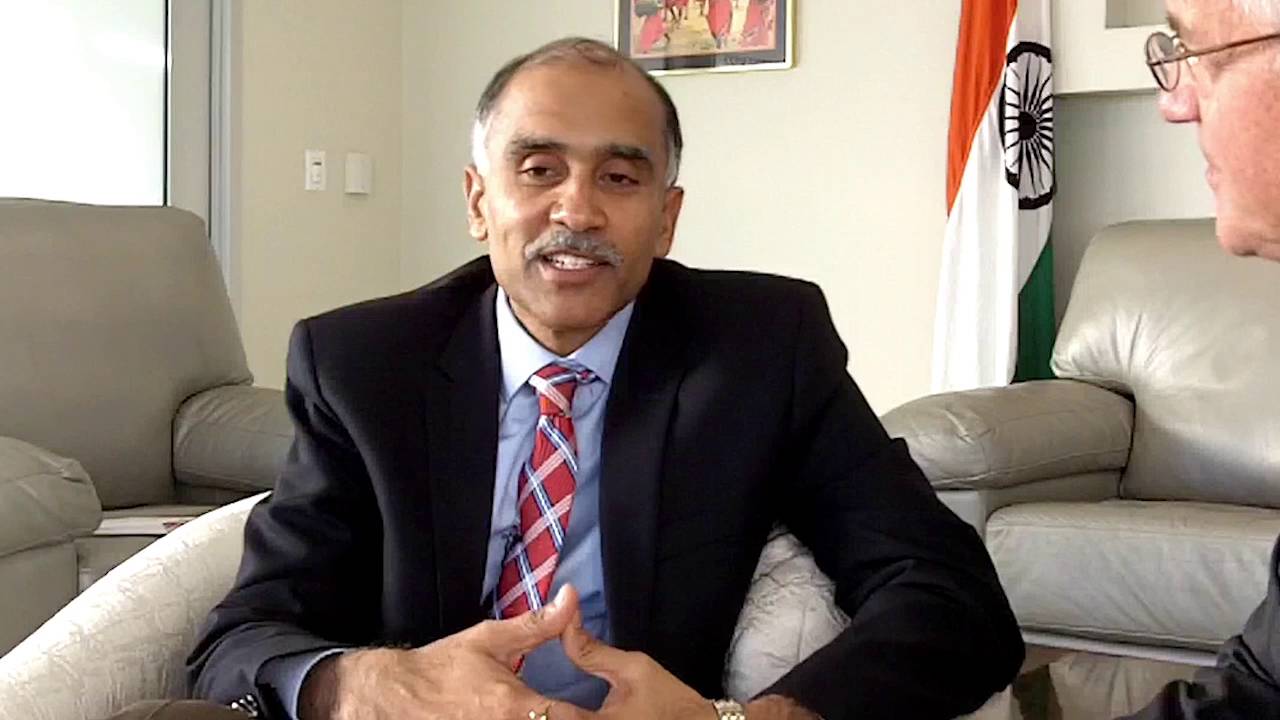 Russ: This is the PKF Texas Entrepreneur’s Playbook. I’m Russ Caper sitting in this week, and my guest is the Honorable Parvathaneni Harish, Consul General of the Republic of India for Houston. Harish welcome to the playbook.

Consul General Harish: Thank you Russ. Pleasure to be back again on this show for you for the second time. I’m honored.

Russ: Well I’m honored to have you as well. It was a little bit more than a year ago.

Russ: There’s been a lot of changes in your country, a few in our country, but let’s start right here. Tell us how you would depict the relationship today between India and Houston.

Consul General Harish: The relations between India and Houston have never been better. I think there has been far greater exchange in terms of trade and commerce. A lot of people have been going to and fro, and we’ve had a lot of Indian trade delegations that have been visiting and scouting for locations to establish their base and operations in Houston. I think a lot of people are excited about the prospects that have opened up. I know the price of oil has gone down significantly since we last met. Nevertheless, the opportunities in the petrochemical sector, oil and gas sector are very exciting. The Indian service sector companies are located here, and we just had Judge Ed Emmett lead a trade delegation to India, and we’re looking forward to a trade delegation being led by the Honorable Mayor Parker to India sometime in April next year.

Russ: Great, fantastic. Well I have to tell you Harish that the number of people that I know that are successful leaders of business in Houston from India is huge. There must be just an extraordinary large population of Indians in Houston.

Consul General Harish: Houston has a significant population of Indians. I would say something in the range of anywhere between a 120 to 140,000 people of Indian origin. Some of them are US citizens, some of them are Indian citizens on green cards, or on employment visas. To an extent, this is also a self-selected group. The Indian immigrant story in the US is very unique. Most of them come here with skills. Most of them are already engineers, or doctors, or other professionals before they come to the US. They come to study in the US, so for most of them the first port of call is probably a university, and then on they require their skills. So when you hear a lot of talk about STEM disciplines, I think you will find that the significant, a number of members of the Indian-American community are indeed specialists from these STEM disciplines, and that explains the fact why they have done extraordinary well, why they are very productive and contribute to the US economy, and how they have acted as a very successful bridge between our two countries.

They’re in academia, they’re entrepreneurs, they have established their own companies. According to one figure I read in the study, over 1/5 of all publicly and private owned entrepreneurial  ventures have begun by people of Indian origin. So I think it’s a very extraordinary talent, and of course the figure is much higher if you go to the Silicon Valley, but even in Houston you’ll see that there is a national entrepreneurial flare for most members of the Indian-American community, and they branch off. They are highly qualified. They have access to resources, and the intellectual capital, and they branch off and establish networks not only here, but in other parts of the globe.

Russ: Very impressive, I remember when Thomas Freedman wrote the book The World is Flat, must have been more than 10 years ago now. It was talking about you know global capitalism breaking out with emphasis on China and India, but almost in my opinion there was more emphasis on China than India. You look at it today and the American-Indian relationship is just incredible, and seeming to exceed that of China, and not that it’s a contest, but also even understand the population of India is expected to surpass China in the not too distant future.

Consul General Harish: At some time in the future it would. Though our population is stabilized, I think the current demographic dynamics would imply that at some stage our population would, but having said that, I think we still have have a lot of catching up to do as far as economic growth is concerned with China, and that’s one of the focus areas which brings me to the recent momentous developments in India. I think we have been through a general election this summer. It has been a momentous election for the first time in almost 30 years, 3 decades we have a government that has a stable majority in our parliament. I think this is very important, and one of the key issues that brought them to power is the issue of development, and economic growth. So I think this has been a key topic of this government, how to focus on economic growth.

You would see Russ in the last few years, especially the last two years, there has been a negative perception about India relating to some issues at home, and also related to perception of some investors, and how business in industry in general looked at it. So the government now is very keen, and as our Prime Minister promised. He said as far as foreign investment in India is concerned, and as far as trade and economy is concerned there would be no red tape. There will only be the red carpet. So that is the Prime Minister’s commitment.

In the last six months we have actually seen some of these changes implemented. The economic changes being made by the executive, some legislative changes, because we have laws, which date back to 100 years, which are still on the statute book, and it includes changes in the way business is done. For example, just to give you a small example, how would, for example, an industrial inspection take place? Until now, if an industry inspection took place at the whim of the inspector, he had probably greater discretion in deciding who to visit and inspect or not. Now a lot of these would be generated through a random process, so a lot of technology is being brought in at various and multiple levels to eliminate discretion, to make it more reliable, and dependable, and to eliminate any uncertainty in the business decision making process. I think there are going to be a lot of changes as far as labor issues are concerned, a lot of the labor regulations are being reviewed.

I think the whole thrust of the government is to create more jobs, to ensure there is greater growth. This is very important to us, Russ, for the simple reason that we will have more than 10 million people entering the job market on an annual basis, and maybe of these people are going to come out of the agriculture sector, move from rural areas to urban areas. The challenge for us, for our government is to see how best we can skill these people who are going to come from the agricultural sector, and are looking for jobs in the manufacturing and service sectors. So the Prime Minister has created skill development ministry with a specific focus on how to be empowered, and give the skills to these member of the youth, a significant portion of our demography, but with 60 percent of the population are between 15 and 60 years of age. So this is a huge number who are in the productive age group. We have to skill them. We have to ensure that they reach their full potential, and we have to ensure to see how best they could contribute to the national economy. That continues to be a very significant focus of this government.

Russ: Wow everything that I’ve heard about the new Prime Minister had been very, very positive. The only thing that’s not totally positive is well let’s see how well he executes, but it sounded like it was just what the doctor ordered for India. We might need that in the US right now too with our leadership, but does it affect you, does it affect the Council General? Can you feel a difference?

Consul General Harish: We do feel a difference, and just to give you a very significant example how it affects, the prime minister undertook a very successful visit to this country in September. He met over 20,000 members of the Indian-American community at the Madison Square Garden, and then after that he had a meeting with the president. One of his announcements during his interactions in the US was to give a visa on arrival, a travel authorization for US citizens to be able to go to India so that they could get travel authorization in four days mandatory with a copy of your travel authorization, and go to India for tourism, or what was called for medical purposes, or medical tourism, or even for some aspects of business, casual business work. So these issues were announced when the prime minister was in US. Within two months of his going back, he had ensured that all links of government had coordinated this, and it was implemented by the 27th of November. For a country of our size, and our complexity, to be able to implement a visa on arrival process that covers over 40 countries and to execute it in probably 2 months time I would say is unprecedented.

So has it affected the consulates? Yes it has absolutely, and in a very, very significant way. It removes a great hindrance for someone who suddenly decides to go to India for tourism or for business. You don’t have to send your passport here for a visa. You could apply online, pay through your credit card, get an authorization in four days, and travel to India for up to one month. So for us this is a good example of an out of the box thinking where political leadership was able to make a significant difference, and implement what this promised in the time span, which was hitherto not seen.

Russ: Well it’s very impressive,  and frankly I’m kind of excited about it. I think there’s benefits Houston, the United States to be closer and closer with India. I really appreciate you giving us some of your time and bringing us up to date.

Consul General Harish: I just have to say one last word. They look forward to welcoming President Obama for our Republic Day celebrations on the 26th of January in Delhi, so for us, I think this is a historic visit of the US President. We have never had the US President as a chief guest for our Republic Day celebration. So I think as you can see, relations between India and Houston, and between India and the US, and between our two people have never been stronger.

Russ: Thank you so much for giving us some of your time.

Russ: You bet, and that wraps up my discussion with Parvathaneni Harish, Consul General of the Republic of India in Houston, and this has been another thought leader production brought to you by PKF Texas Entrepreneur’s Playbook. Tune in next week.